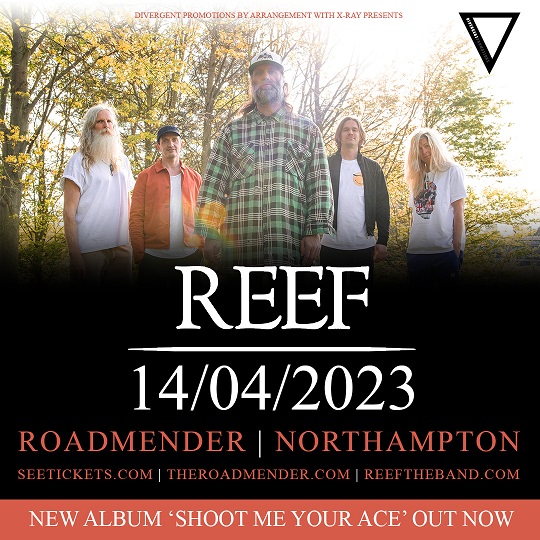 THIS EVENT HAS BEEN RESCHEDULED TO FRIDAY 14TH APRIL 2023.

ALL TICKETS ARE VALID FOR THE NEW DATE

Glastonbury rockers REEF are firmly back reenergised like never before with a confident spring in their step which has already seen the band soar back into the UK Top 20 earlier this year with their recently released new album ‘Shoot Me Your Ace” produced by Andy Taylor (Duran Duran/The Power Station).

Since the albums release and numerous rave reviews the band have opened for the likes of the Rolling Stones at their Olympic stadium show in Munich , Headlined the Avalon Stage at Glastonbury and are currently getting set to perform at a selection of the best festivals across the UK and Europe this summer. Summer is indeed very much in bloom for Somerset’s finest rock band and it does not stop there as the band have also been confirmed as special guests for the Black Crowes on their upcoming Shake Your Money Maker UK Tour this Autumn too.

Added to this the bands live line up has also been bolstered by the extra addition of North Devon virtuoso Guitarist Amy Newton who has also added an extra special dynamic and energy to the bands already well received live show .

In short there is some strange musical alchemy taking place as this is a band very much in the ascendancy  . Yes the band have sold in excess of 3 million albums worldwide since forming in 1993 . Yes they have also had 9 UK Top 40 singles and 6 UK Top 40 albums as well as penning arguably one of the biggest rock songs of the 90’s with their Top 10 single Place Your Hands produced by legendary producer George Drakoulias .

That said it is hard not to feel that this is a band destined for even greater and bigger things as anyone that has seen the band recently will attest too. Gary Stringer is on the vocal form of his life and alongside him Jack Bessant’s bulldozer bass riffs have never sounded so good. The spirit of this band is infectious and the new repertoire is certainly getting people talking as Classic Rock Magazine so accurately summarised when talking about their new album ‘this is lightening in a bottle stuff” .

Below are some of the recent reviews of the bands new album.

Absolutely Brilliant . Swaggering Rock on Top of a Marshall Stack –

There is a funky goodness here but this is a raucous rollicking rock album . As if the ballsy Brouhaha was bottled up and its escaped with an Explosion. Ace Indeed .

Reef Tap into their influences to deliver a killer slice of guitar-fuelled rock , with 10 slabs of bona fide Classic Rock n Roll that draw on the spirit of Humble Pie , The Faces and the Stones .

Enjoyable. Exciting and whole hearted , Shoot Me Your Ace is the sound of a band with real musical simpatico and capturing something pretty special as it was happening. That’s Lightening in a Bottle stuff .